Taxpayer Y pays more in taxes because she pays income taxes out-of-state and pays a county income tax in her home state.  Unfair?  (Not necessarily.  After all, Taxpayer Y receives government services in the county where she resides.)  Unconstitutional?  The Supreme Court will decide. The Supreme Court hasn’t decided a state and local government tax case since Armour v. Indianapolis, during the Court’s 2011 term.  In Comptroller v. Wynne it will decide an issue of first impression:  whether a state must offer a credit to its residents for all income taxes paid to another jurisdiction.  A decision against Maryland’s Comptroller would limit state and local taxing authority nationwide.
Read More 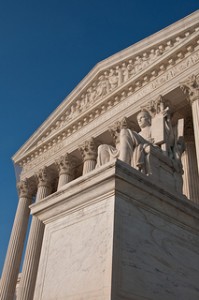 By Lisa Soronen [We are thrilled to have a guest post from Lisa Soronen, executive director of the State and Local Legal Center.] Last week, the Supreme Court struck down aggregate limits on individual contributions to candidates for federal office, political parties, and political action committees. McCutcheon v. FEC will likely impact the dozen or so states that place aggregate limits on individual campaign contributions to candidates for state office. A cursory glance at state campaign finance laws regulating local elections indicates that states generally have not adopted aggregate caps meaning this decision will not affect contributions to local elections. Federal law allows
Read More

Next Wednesday, January 15th, the Supreme Court will hear arguments in a case that could address that question. McCullen v. Coakley, No. 12-1168 concerns whether a Massachusetts law that bars entering or remaining within a 35-foot radius of a reproductive-health-care facility violates the First Amendment. The First Circuit upheld the law as a reasonable, content-neutral limit. Local governments have filed two important amicus curiae briefs in the case. First, IMLA joined the National League of Cities, National Association of Counties, the International City/County Management Association, and the U.S. Conference of Mayors in a brief urging the Court to respect state and local governments' need to establish buffer zones to protect public safety. The brief offers a number of examples
Read More

Be sure to check out details of the Supreme Court Practice Seminar that IMLA and the State and Local Legal Center will host on March 4, 2014. Lisa Soronen, executive director of the State and Local Legal Center, has invited some remarkable Supreme Court practitioners. It is a can't-miss program for anyone intersted in the Court. You can register here....

The Court reaffirmed that Younger abstention is appropriate, and federal courts should defer to state courts, only when faced with: If none of those exceptional circumstances is present, the federal courts may not invoke Younger abstention. As we discussed previously, Sprint involved two separate actions that Sprint Communications, Inc. initiated against members of the Iowa Utilities Board (IUB), one pending in Iowa state court and the other in the U.S. District Court for the Southern District of Iowa.  In both actions,
Read More

The Supreme Court and Local Governments

(1) Next Term Over at Cities Speak, Lisa Soronen of the State and Local Legal Center outlines upcoming Supreme Court cases that could affect local governments: And Wednesday, Irene Zurko discussed the case of Sprint Communications v. Jacobs. For a full preview, register to hear from Tom Hungar, Kannon Shanmugam, and David Savage on October 22nd here. (2) More on Town of Greece SCOTUSblog has some interesting commentary on Town of Greece, a case that we previously addressed here. Eric Rassbach says that those challenging the Town's prayer practice have reached a "'Hail Mary'" moment" where "facing imminent disaster" they "stake[e] everything on one desperate, final gambit:"
Read More
Our Website Uses Cookies
We are always looking to improve your experience. We use anonymous data provided by cookies to do so. By continuing to use this website you agree to the use of these technologies.
AcceptCookie Settings
View Our Privacy Policy
Privacy & Cookies Policy