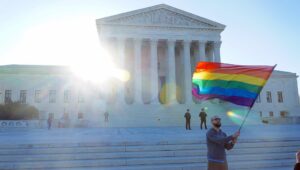 The Supreme Court held in a 6-3 opinion in Bostock v. Clayton County, that an employer who fires an individual merely for being gay or transgender violates Title VII.  Writing for the majority, Justice Gorsuch explains “[s]ex plays a necessary and undisguisable role” in an employer’s decision to “fire an individual for being homosexual or transgender”, which is “exactly what Title VII forbids.”

The textualist opinion includes numerous examples of why it is “impossible to discriminate against a person for being homosexual or transgender without discriminating against that individual based on sex.”  For example, when an employer fires a man for being attracted to men, the majority explains that the employer is discriminating “against him for traits or actions it tolerates in his female colleagues.”  It does not matter under Title VII if more than one causal factor is at play, so long as sex is one of the but-for causes of the discrimination.  The majority explains that the statute’s ordinary public meaning at the time of the law’s adoption provides for a straightforward rule that an “employer violates Title VII when it intentionally fires an individual employee because in part on sex.”

Further the majority explains that it is no defense to a Title VII violation that the employer would have treated women and men as a category the same because the Act prohibits discrimination against an individual.  Under this theory advanced by the employers, it would not have been a Title VII violation to fire someone for being gay or transgender because the employer would have fired both gay men and lesbians, for example.  The majority explains that in fact, instead of “avoiding Title VII exposure, this employer doubles it” under this theory.

Nor does it matter, according to the majority, that Congress may not have intended or expected the result that Title VII forbids discrimination on the basis of sexual orientation or transgender status.  Not only would the Court have to overturn decades of Title VII jurisprudence under this approach, but the Court also points out that Title VII’s prohibition of sex discrimination in employment is a “major piece of civil rights litigation…written in starkly broad terms.”  Justice Gorsuch points out that the Court’s holding that the Act prohibits firing employees because of their sexual orientation or transgender status is indeed an elephant.  But contrary to the employer’s arguments, the elephant was not hiding in a mousehole in this case, exactly because Title VII sweeps so broadly.

Justice Alito wrote a scathing dissent joined by Justice Thomas (Justice Kavanaugh wrote a separate dissent).  In Justice Alito’s dissent, he accuses the majority of enacting legislation and violating the separation of powers.

There is no doubt that this decision will create an avenue of liability for local governments in more than half of the 50 states that did not already have state or local protections in place for LGBTQ employees.  Employers that did not already have these protections in place will want to review and update policies accordingly and also ensure proper training of their workforce.  That said, some states and local governments filed amicus briefs in support of the employees in this case, noting for example, the prevalence of discrimination against LGBTQ employees, which in turn shows up in lower salaries and higher unemployment rates.  The states’ amicus brief in support of the employees notes that the effects of discrimination can cost state and local governments millions each year in lost tax revenue and increase costs on states and local governments as employees may turn to them for public assistance.  A group of cities, towns, and counties also filed an amicus brief in support of the employees in this case, echoing these concerns, explaining: “[a]s providers of the primary safety net services in our nation, amici know from their own experience how workplace discrimination, in any form, strains taxpayer resources and threatens the vitality of local communities and economies.”