Takings: Rational Basis Review Applies to Deprivation of Work, but Concurrence Suggests that Work is a Fundamental Right

17 Nov Takings: Rational Basis Review Applies to Deprivation of Work, but Concurrence Suggests that Work is a Fundamental Right

A tanning salon unsuccessfully challenges a COVID shutdown mandate on Equal Protection and Takings grounds—but the concurrence argues that work is a fundamental unenumerated right and implies that the Supreme Court should apply strict scrutiny to governmental acts which deprive one of the right to earn a livelihood. 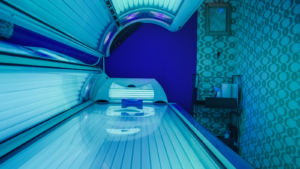 In March 2020, after the Governor of Mississippi declared a state of emergency in response to the Covid-19 pandemic, Columbus, Mississippi (City) passed an ordinance (Ordinance) including a number of measures to counter the spread of the virus. The Ordinance’s stated purpose was to reduce excessive person-to-person contact so as to slow the pandemic. It subjected to closure bars, nightclubs, gyms, spas, barbershops, beauty parlors and other businesses; places of worship were limited to gatherings of no more than 10 people.

Section 2 of the Ordinance subjected Golden Glow Tanning Salon (Golden Glow) to mandatory closure from March 21 through May 9, 2020. An owner of Golden Glow told the mayor and two city council members that his tanning business could operate without person-to-person contact, but the City made no exception.

In May 2020, Golden Glow brought a Section 1983 action against the City, alleging that

the Ordinance violated the Equal Protection Clause by treating tanning salons differently from churches, Wal-Marts, and liquor stores and constituted a taking under the Fifth Amendment entitling Golden Glow to just compensation. The district court granted the City’s summary judgment motion and Golden Glow appealed to the Fifth Circuit.

To establish its equal protection claim, Golden Glow had to show it had been treated differently from another similarly situated business. To determine what businesses are similarly situated to tanning salons, the court considered “the full variety of factors that an objectively reasonable . . . decisionmaker would have found relevant” when making the classification.

It noted similarities between tanning salons and the other businesses shut down by the Ordinance–each provided recreational, social, “or as some would say, ‘nonessential’ services” where the clientele typically spent more than a few minutes at the location, with the likelihood of close person-to-person contact.

The district court had found that Golden Glow could rationally be differentiated from churches, large retailers, and liquor stores, which “provide different services,” “are in different positions,” “and do not present the same health and safety concerns” as tanning salons. The Fifth Circuit agreed as to churches and large retailers like Walmart, but “In an abundance of caution,” assumed that liquor stores and tanning salons were similar.

The Circuit’s next task was to determine the appropriate level of scrutiny for Its review. Golden Glow argued that strict scrutiny applied because the Ordinance deprived certain business owners of a fundamental right—namely, the right to work. That argument failed:

The Supreme Court does not now recognize a fundamental right to work and has consistently applied rational basis review “to state legislation restricting the availability of employment opportunities.” . . . As the Court put it in Conn v. Gabbert, “the liberty component of the Fourteenth Amendment’s Due Process Clause includes some generalized due process right to choose one’s field of private employment, but a right which is nevertheless subject to reasonable government regulation.” 526 U.S. 286, 291–92, 119 S. Ct. 1292, 1295–96 (1999).

Accordingly, rational basis review applied. Under that standard, a governmental classification “will be upheld ‘if there is a rational relationship between the disparity of treatment and some legitimate governmental purpose.’” Golden Glow contended that the Ordinance created an arbitrary distinction between tanning salons and liquor stores that bore no rational relationship to public health given the salon’s ability to operate safely and without customer contact. The City responded that the length of time spent in a tanning bed as compared to a liquor store raised the probability that the virus was more likely to spread in a tanning salon. “This proffered reason is not arbitrary.”

While the Ordinance may have been overinclusive in the absence of exceptions for safe and sterile tanning salons, and underinclusive for failing to shut down every similarly situated business, “such imperfections do not make a law supported by at least one ‘conceivable basis’ an irrational one.”

Golden Glow argued that the closure of the salon was a per se taking because it amounted to both a physical invasion (under Cedar Point Nursery) and a total deprivation of productive use. Neither rationale applied: the Ordinance did not authorize physical entrance, and while closure constitutes a deprivation of some economically productive uses nothing in the record supported the conclusion that the Ordinance rendered the entire property “valueless.”

Judge James Ho concurred in the result but argued that there is substantial rationale for the proposition that the right to work is fundamental and should be protected accordingly.

The Supreme Court has recognized a number of fundamental rights that do not appear in the text of the Constitution. But the right to earn a living is not one of them—despite its deep roots in our Nation’s history and tradition. Governing precedent thus requires us to rule against the countless small businesses, like Plaintiff here, crippled by shutdown mandates imposed by public officials in response to the COVID-19 pandemic. Cases like this nevertheless raise the question: If we’re going to recognize various unenumerated rights as fundamental, why not the right to earn a living?

As he saw it, under COVID shutdowns, “Millions of wage earners and small business owners watched helplessly as public officials claimed the ‘extraordinary power to force people from their chosen occupations, destroy vast investment and reliance interests, and make millions dependent on government assistance. . . .’” The Supreme Court has long said that it will recognize “those fundamental rights and liberties which are, objectively, deeply rooted in this Nation’s history and tradition, and implicit in the concept of ordered liberty . . . “ Under the Court’s current approach to unenumerated rights, “we privilege a broad swath of non-economic human activities, while leaving economic activities out in the cold.” But, Judge Ho says, scholars have suggested that this may get things backwards. There is ample history evidencing the protection of a right to pursue one’s occupation against arbitrary government restraint in the courts of England—a philosophy brought to the Colonies. George Mason authored the Virginia Declaration of Rights and included an express provision securing “the enjoyment of life and liberty, with the means of acquiring and possessing property, and pursuing and obtaining happiness and safety., a sentiment with which Jefferson agreed.

Ho argues that many of our fundamental rights hinge on the right to work:

The First Amendment guarantees the freedom of speech and religion. But the meaningful exercise of those freedoms often requires the expenditure of resources. The Fourth Amendment secures the people in their houses, papers, and effects, and the Fifth Amendment protects property from taking without just compensation. But it’s virtually impossible for most citizens to obtain property without an income. In short, the right to engage in productive labors is essential to ensuring the ability of the average American citizen to exercise most of their other rights.

In conclusion, he says, various scholars have determined that the right to earn a living is deeply rooted in our Nation’s history and tradition—and should be protected under our jurisprudence of unenumerated rights. “But that is for the Supreme Court to determine.”