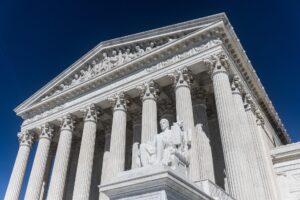 Last week, in a win for local governments, the Supreme Court held 6-3 in Vega v. Tekoh, that an individual may not bring a Section 1983 claim based on an alleged improper admission of an unMirandized statement during a criminal prosecution.

This case involves a deputy sheriff’s investigation of sexual assault allegations.  Deputy Vega believed his questioning was non-custodial and he did not Mirandize the suspect—Terence Tekoh—prior to asking questions about what had happened.  Tekoh ultimately agreed to write down what happened, confessing to the crime both in writing and in conversation (Tekoh claims this was a coerced confession).  Tekoh was arrested and charged in state court for the sexual assault.

The prosecutor introduced the confession against him at trial as evidence of his guilt, and the judge admitted the confession—holding that Tekoh was not in custody when the statement was taken and there was therefore no Miranda violation. The jury nonetheless returned a verdict of not guilty.

After his acquittal, Tekoh sued Deputy Vega under 42 U.S.C. § 1983 for violating his Fifth Amendment right against self-incrimination.

In a 6-3 decision authored by Justice Alito, the Supreme Court held that a Miranda violation does not provide a basis for a claim under Section 1983.   The Court reasoned that Miranda is a prophylactic rule, meant to provide procedural safeguards to ensure that police do not violate the Fifth Amendment rights of those in custody.   The rule, the Court explained is “constitutionally based” but it remains prophylactic.  And, the Court reasons, at no point in the Miranda decision or any subsequent decision, did the Court say a violation of the Miranda rule was tantamount to a violation of the Fifth Amendment.  Instead, the Court explained, Miranda and subsequent cases demonstrate that the Miranda warnings are “needed to safeguard [the Fifth Amendment] right during custodial interrogation.”  The remedy for a violation of Miranda is suppression of evidence at the criminal trial, not a Section 1983 lawsuit.

Finally, the Court noted that the fact that Miranda is a prophylactic rule does not necessarily doom Tekoh’s claim because Section 1983 claims may be brought based on “the deprivation of any right, privileges, or immunities secured by the… laws.”  (emphasis in the original).  However, the Court explained that “a judicially crafted prophylactic rule should apply only where its benefits outweigh its costs.”  (cleaned up).  And in this case, the Court concluded the benefits of allowing a Section 1983 claim based on the introduction of an unMirandized statement would be “slight” and the costs of judicial economy and federalism concerns would be “substantial.”  Thus, the Court concluded that exclusion of the unwarned statements is a “complete and sufficient remedy” except in “unusual circumstances.”

This was an important win for local governments as a contrary result could have created substantial liability for local governments.  This is particularly true given how many encounters police officers have with citizens and how it is not always clear where the custodial line is.  IMLA filed an amicus brief at the certiorari stage and joined an amicus brief filed by the SLLC at the merits stage, authored by Harker Rhodes at Kirkland & Ellis.  To read our amicus brief, click here.