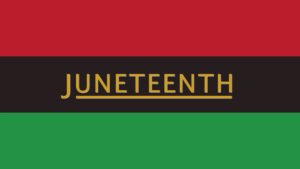 In 2020, George Floyd’s murder reminded the United States to look at the mistreatments the country commits to African Americans since their ancestors were forced into slavery.  The result of that reckoning was a formal recognition of a holiday that had been celebrated by African American communities across the nation for over 150 years.  That day was June 19th which is recognized as the final emancipation of African Americans’ enslaved ancestors.  On June 19, 1865, Major General Gordon Granger led Union soldiers to Galveston, Texas, with news that the war had ended and that the enslaved were now free.  This was two and a half years after President Lincoln’s Emancipation Proclamation, which became official January 1, 1863, and over two months after Robert E. Lee surrendered to the Union Army.

Congress passed legislation establishing the day as a federal holiday on June 16, 2021, which was signed into law by President Biden the following day.  Juneteenth had previously been established as a state holiday in Texas in 1980, with a number of other states later declaring it a state holiday or day of observance.

Juneteenth commemorates the end of slavery in the United States.  Juneteenth is a celebration of the contributions and achievements of African Americans.  IMLA observes and celebrates Juneteenth.  IMLA encourages local governments across the United States to observe the holiday and discuss its history and importance.

IMLA is committed to diversity, equity, and inclusion for itself and within its membership, prioritizing and valuing differing demographics, backgrounds, values, and perspectives.  IMLA commends local governments who have implemented DEI policies, initiatives, and legislation and seeks to broaden those efforts.