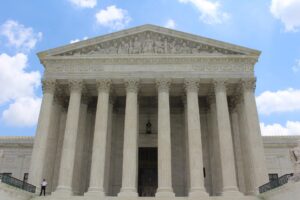 Yesterday, in a unanimous decision in Shurtleff v. Boston, the Supreme Court held that Boston violated the First Amendment by refusing to fly a Christian flag in front of City Hall when it had approved hundreds of other third-party flags over the years prior to this one and never rejected one until now.  This case centered on whether Boston was engaging in government speech or whether it had (inadvertently) created a public forum for private speech, whereby refusing to fly a flag because it is religious in nature would amount to viewpoint discrimination.  Although Boston lost, the decision was not a blow to the government speech doctrine and it provides guidance to local governments, so it will likely prove helpful to local governments in crafting policies related to third party programs like the one at issue in this case.

Boston owns three flagpoles in front of City Hall. Boston flies the United States and the POW/MIA flag on one flagpole, the Commonwealth of Massachusetts flag on the second flagpole, and its own flag on the third flagpole.  Third parties may request to fly their flag instead of the City’s flag in connection with an event taking place near the flagpoles. Over a 12-year period, the City approved 284 flag-raising events and until the Camp Constitution request, never rejected one.

Camp Constitution asked the City to fly its Christian flag while it held an event near the flag. The City refused its requests, explaining that “the City’s policy was to refrain respectfully from flying non-secular third-party flags in accordance with the First Amendment’s prohibition of government establishment of religion.”

Although the Camp Constitution request was the first it ever rejected, it was also the first request made by a religious organization to fly a flag at City Hall. Broadly speaking, the third-party flags that the City approved were for “the flags of other countries, civic organizations, or secular causes.”  Shortly after litigation commenced, Boston memorialized its policy to comport with its past practices.

Camp Constitution sued the City and the First Circuit held that the City was engaging in government speech when it flew third-party flags in front of City Hall and it therefore did not violate the First Amendment.

In an opinion authored by Justice Breyer, the Supreme Court reversed, concluding that after balancing several factors, Boston was not engaging in government speech, and it therefore abridged Camp Constitution’s freedom of speech by refusing to let it fly its flag based on religious viewpoint. The majority underscored the importance of the government speech doctrine: that a government is free to speak for itself, to formulate policies, and implement programs.  And when it does so, “the First Amendment does not demand airtime for all views” as government would be unable to function otherwise.  The crucial question then, was whether this was government speech.

The majority explained whether a government is engaged in its own speech can be difficult to determine where “a government invites the people to participate in a program.”  In these circumstances to determine if a message is government speech, the majority provided a “holistic inquiry,” which looks to “the history of the expression at issue; the public’s likely perception as to who (the government or private person) is speaking; and the extent to which the government has actively shaped or controlled the expression.”

Although the first factor (history) favored Boston, the Court found that the second factor, whether the public would tend to view the speech as Boston’s as being inclusive.  However, on the issue of whether Boston controlled the message, the Court found the answer was “not at all” and ultimately concluded this factor was “the most salient feature of the case.”  Here the Court pointed to the fact that although Boston may have endorsed some messages associated with certain flags like the Pride Flag, a local credit union flag’s connection to the city was “more difficult to discern.”  Furthermore, the Court found the City had no policy (until after litigation commenced) on how to decide which flags it would fly and the City exercised no control over the flag raisings.

The Court also explained that if a local government wishes to speak for itself when it creates a program like Boston did here that involves third party speech they can “easily” do so.  The Court helpfully pointed to the City of San Jose as an example, which provides in writing that its “‘flagpoles are not intended to serve as a forum for free expression by the public,’” and lists approved flags that may be flown “‘as an expression of the City’s official sentiments.’”  While the Court ultimately found Boston had not engaged in government speech in this case, it concluded by noting that nothing prevents the City from changing its policies going forward.

Justice Alito authored a concurrence in the judgment only, which Justices Thomas and Gorsuch joined.  Justice Alito agreed that Boston should lose the case, but did not agree with the majority’s rationale to rely on factors to determine if a message is government speech.  Under his approach, “government speech occurs if – but only if – a government purposefully expresses a message of its own through persons authorized to speak on its behalf, and in doing so, does not rely on a means that abridges private speech.”

Justice Gorsuch authored a separate concurrence in the judgment only, which was joined by Justice Thomas and criticized the Lemon test (which was not invoked by the majority).

IMLA joined a SLLC amicus brief authored by Dan Bromberg and Shelby Dyl with Pillsbury Winthrop.  As a part of the brief, IMLA surveyed our members and that survey was provided as an appendix to the brief.  Thank you to everyone who took the time to participate in that survey.  In the brief, we argued that it was important that the Court provide local governments with clarity on how they can avoid creating public forums and we were pleased that the Court listened to that request.