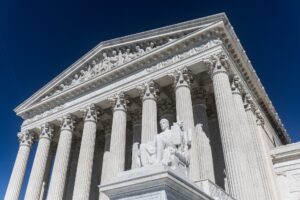 Today, in a great win for local governments, the Supreme Court held in Austin v. Reagan Nat. Advertising of Austin that distinctions between on/off-premises signs are content neutral under Reed v. Town of Gilbert and therefore not subject to strict scrutiny.  Even better, the majority rejected the “need to read test”, which had been adopted by both the Fifth and Sixth Circuit, and the decision also seems to have narrowed Reed’s scope, all in one fell swoop.

At issue in this case is the City of Austin’s sign code (before it was amended) which defined an “off-premise[s] sign” as “a sign advertising a business, person, activity, goods, products, or services not located on the site where the sign is installed, or that directs persons to any location not on that site.” Beginning in 1983, Austin began prohibiting new off-premises signs.  Existing off-premises signs could stay, but they could not change the degree of non-conformity.   At some point, Austin permitted “on-premise[s] signs” to be digitized.  Because digitization did not exist in 1983, the result was that on-premises signs could be digitized, but off-premises signs could not.  When outdoor advertising companies sought to digitize their billboards, Austin denied their request and they sued, claiming the distinctions violated the First Amendment.

The Fifth Circuit concluded that the distinction between on-premises and off-premises is content based and therefore “presumptively unconstitutional” under Reed and subject to strict scrutiny.  The Fifth Circuit reasoned that to determine if a sign is on or off-premises, “one must read the sign and ask: does it advertise ‘a business, person, activity, goods, products, or services not located on the site where the sign is installed, or that directs persons to any location not on that site’?”  The court concluded that because you have to determine the location of the sign does not render it content neutral because you must also ask who the speaker is and what the speaker is saying, which are both hallmarks of content-based inquiries.  The Fifth Circuit then concluded that the City failed to meet strict scrutiny.

In a 5-1-3 opinion authored by Justice Sotomayor, the Supreme Court reversed, concluding that distinctions between on/off-premises signs in sign codes are content neutral and therefore not subject to strict scrutiny.  The Court explained these distinctions are “location-based and content-agnostic…” and they are “therefore similar to ordinary time, place, or manner restrictions.”

Instead of overruling Reed or explaining why Reed does not apply, the majority examined Reed and fit its holding into its interpretation of Reed, in the process rejecting an overly broad reading of the decision.  In doing so, the majority expressly rejected the Fifth Circuit’s conclusion that a “regulation is automatically content based…if it requires reading the sign” as “too extreme an interpretation” of Reed.  (The Sixth Circuit had similarly adopted a “need to read test” in Thomas v. Bright, 937 F.3d 721, 729 (6th Cir. 2019)).

The Court ultimately remanded the case for further analysis, given that the Fifth Circuit had not reviewed the ordinance under intermediate scrutiny.

Justice Breyer wrote a concurrence that was significantly more critical of Reed and also cites our amicus brief not once, but twice when discussing the traffic safety implications of digital billboards.

Justice Alito concurred in the judgment only and would have issued a significantly narrower ruling in Austin’s favor based solely on the fact that the “distinction between a digitized and non-digitized sign is not based on content, topic, or subject matter.”

Justice Thomas, joined by Justices Gorsuch and Barret dissented.  For those keeping score, you will remember that Justice Thomas authored Reed v. Town of Gilbert and he accuses the majority of “misinterpret[ing] Reed’s clear rule for content-based restrictions and replac[ing] it with an incoherent and malleable standard.”  The dissent argues that the distinction is not location based because the official must not only know where the sign is to enforce the sign code, but must also know what the sign says. Further, the dissent argues that the majority’s rule cannot be applied in a principled way as it does not “explain how courts should draw the line between a sufficiently substantive or specific content-based classification and one that is insufficiently substantive or specific.”

While further analysis of the decision is necessary, this case is a huge win for local governments. The Court could have taken the Justice Alito narrow way out of this case, finding only that the digitization / non-digitization aspect of the distinction was not content based, which would have left the thousands of local governments around the country that make distinctions between on/off-premises signs in limbo in the process.  Not only did the Court take a broader view of the issue in terms of finding that the on/off-premises distinction itself is content neutral, but in rejecting the “need to read” test, the Court issued its decision with (in its words) a dose of commonsense, preventing many other ordinances that under a formalistic reading of Reed would be considered content based from being struck down.  See Act Now to Stop War & End Racism Coal. v. District of Columbia, 846 F.3d 391, 404 (D.C. Cir. 2017) (rejecting the “need to read test” in the context of regulation that allowed signs to stay affixed to publicly owned lampposts for no more than 180 days except signs related to a specific event needed to be removed 30 days after the event).  Finally, the Court seems to have pulled in the reins on an overly broad reading of Reed, which given that local governments have faced challenges to not only sign ordinances under Reed, but a host of other regulations is a significant development.

We joined the State and Local Legal Center’s brief at the merits stage, which was drafted by John Korzen, the Director of Appellate Advocacy for Wake Forest University School of Law.  To read our merits stage amicus brief, click here.