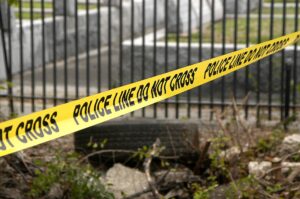 On October 18th, the Supreme Court granted qualified immunity to officers in two cases on a per curiam basis, summarily reversing lower courts in each: Rivas-Villas v. Cortesluna and City of Tahlequah v. Austin.  IMLA filed an amicus brief in the Rivas – Villegas v. Cortesluna case in support of the officers.  In both cases, the Supreme Court relied on video evidence and therefore undisputed facts.  And in both cases, the Court concluded the law was not clearly established given significant factual disparities between the cases relied on by the circuit courts and the facts of each case.

In Rivas-Villegas, police officers responded to a domestic disturbance 911 call made by a woman and two children who indicated the mother’s boyfriend was threatening them with a chainsaw.  They indicated they had locked themselves in a bedroom.  When the officers arrived, they saw the boyfriend, Cortesluna, through a window but did not see or hear a chainsaw. The officers formulated a plan, which included using less lethal force and went and knocked on the door to ask Cortesluna to come outside and speak with them.  They announced themselves and when Cortesluna came to the door, he was holding a large metal object that appeared to be a crowbar.  The officers ordered him to drop the weapon and come outside.

Cortesluna brought suit against the officers, claiming excessive force for both the use of the bean bag shotgun and for the knee on his back for 8 seconds.  The Ninth Circuit concluded that the officer who fired the beanbag gun did not violate the Fourth Amendment given the rapidly unfolding events and the threat to the officers when Cortesluna was reaching toward the knife in his pocket.  As to officer Rivas-Villegas, however, the Ninth Circuit concluded that he violated the Fourth Amendment right to be free from excessive force “by leaning too hard” on Cortesluna’s back, allegedly causing injury because by the time he did so, the threat had passed.  The Ninth Circuit also denied qualified immunity, concluding it was clearly established that “police may not kneel on a prone and nonresisting person’s back so hard as to cause injury.”

In reversing, the Supreme Court noted LaLonde v. County of Riverside, 204 F.3d 947 (9th Cir. 2000), the circuit court case which the Ninth Circuit had claimed clearly established the law for the purposes of denying qualified immunity, diverged from the situation in this case in several respects.  LaLonde involved a response to a noise complaint, whereas this case involved a response to a serious domestic violence situation, possibly involving a chainsaw.  Additionally, the individual in LaLonde was armed only with a sandwich, whereas in this case, it was undisputed that Cortesluna had a knife in his pocket.  Finally, and again, relying on the video evidence, the Court concluded that the officer in this case put his knee on the suspect’s back for no more than 8 seconds, whereas in the LaLonde case the plaintiff had claimed the officer “deliberately dug his knee into his back when he had no weapon and had made no threat when he approached the police.”  In granting qualified immunity, the Court concluded LaLonde did not “give fair notice” to the officer.

The Austin case also involved a situation where officers were called to a possible domestic violence situation where an intoxicated individual would not leave his ex-wife’s garage.  When she called 911, she explained to the dispatcher that she needed police assistance or “it’s going to get ugly real quick.”  Relying on body camera footage, the Supreme Court describes the following facts. When the officers arrived, they stayed about 6-8 feet back from the ex-husband who proceeded to walk to the back of the garage where his tools were.  He grabbed a harmer and turned around to face the officers, bringing it up with both hands as if he was going to swing a baseball bat.  The officers can be heard yelling at him to drop the hammer.  Instead of heeding their orders, he raised the hammer as if he planned to throw it or charge at one of the officers and two officers then fired their weapons and killed him.

The Supreme Court reversed the Tenth Circuit on the issue of clearly established law, without deciding whether an officer can violate the Fourth Amendment by “recklessly creating a situation that requires deadly force.”  In concluding the officers were entitled to qualified immunity, the Supreme Court explained “[n]ot one of the decisions relied upon by the Court of Appeals…comes close to establishing that the officers’ conduct was unlawful.”  For example, Allen v. Muskogee, 119 F.3d 837 (10th Cir. 1997) involved a situation where officers were responding to a possible suicide situation by running toward the individual in his parked car and screaming at him while attempting to wrestle the gun from his hands, which was readily distinguishable from the facts in this case.  In concluding that the law was not clearly established, the Court noted that it has repeatedly told lower courts “not to define clearly established law at too high a level of generality” and that “it is not enough that a rule be suggested by then-existing precedent.”

As more departments move toward the use of body worn cameras, these cases highlight the importance of this evidence in defense of your Section 1983 case.  Additionally, this also provides an example of the value of IMLA’s legal advocacy program and we hope you will feel free to reach out to us if you need IMLA’s support as an amicus in a case that rises to the level of national importance.