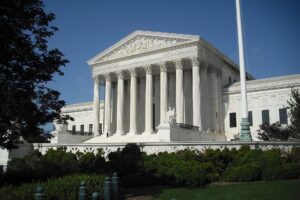 In a 6-3 opinion the Supreme Court, likening the protection of property rights to the preservation of freedom, held in Cedar Point Nursery v. Hassid that a California regulation that provided union organizers access to agricultural employers’ property for up to three hours per day, 120 days per year, was a per se physical taking under the Fifth Amendment.  While the case was a loss for the State, looming larger in the case was the question of how the decision could implicate state and local regulations that allow temporary access to private property for things like government inspections and searches.  The majority opinion indicated that many of these regulations will not be implicated “because they are consistent with longstanding background restrictions on property rights.”

At issue in this case is the California Agriculture Labor Relations Act (ALRA), which allows union organizers access to agricultural employees at employer worksites. The union organizers, under the Act, have access to employer worksites during four thirty-day periods each year for up to three hours each day before or after working hours or during lunch.  Two agricultural employers brought a claim against the California agency in charge of administering the ALRA claiming that the Act amounted to an uncompensated per se physical taking under the Fifth Amendment of the U.S. Constitution.

The question in this case was whether the temporary easement amounted to a per se physical taking under the Fifth Amendment.  The reason this matters, as Justice Breyer explains in his dissent, is because if a regulation amounts to a physical appropriation of property than “there is no need to look further; the Government must pay the employers ‘ just compensation.’”  However, if the regulation is regulating the employers’ property rights, Justice Breyer explains under Penn Central Transp. Co. v. New York City, 428 U.S. 104 (1978), “the government need pay the employers ‘just compensation’ only if the regulation ‘goes too far.’”

Today, in a pro-property rights decision authored by Chief Justice Roberts, the Supreme Court held that the access regulation at issue is a per se physical taking because it “appropriates a right to invade the growers’ property” thereby preventing the owner from exercising its right to exclude, which is “one of the most treasured rights of property ownership.”  The Court explained that “[w]henever a regulation results in a physical appropriation of property, a per se taking has occurred, and Penn Central has no place.”

The majority rejected the State’s arguments that because the regulation did not provide year-round 365 days a year access, it could not be a per se taking, calling that argument “insupportable as a matter of precedent and common sense.” On this point, the majority notes that “a physical appropriation is a taking whether it is permanent or temporary” and the duration only points to the amount of just compensation under the Fifth Amendment.

IMLA’s joined an amicus brief filed by the State and Local Legal Center pointing out that local governments routinely exercise their police power in order to enter private property for health and safety inspections for everything from restaurants and nursing homes to child welfare visits and that any rule that would find a per se taking in this case could implicate these important government functions.  The majority opinion directly addressed these concerns, noting first its holding “does nothing to efface the distinction between trespass and takings” and that “[i]solated physical invasions, not undertaken pursuant to a granted right of access, are properly assessed as individual torts rather than appropriations of a property right.”  More important for government functions, the majority specifically noted that “many government-authorized physical invasions will not amount to a taking because they are consistent with longstanding background restrictions on property rights.”  The Court noted that nuisance abatement, the doctrine of public or private necessity, and the execution of reasonable search warrants would all be activities that would be included in the traditional common law privilege to access private property and would not subject the government to a takings claim.  The Court also noted that governments can require property owners to give up their right to exclude and allow access to government officials as a condition for receiving a benefit, for example, through the grant of a permit, license, or registration for health and safety inspections.

Justice Breyer, joined by Justices Sotomayor and Kagan dissented and raised a number of questions about the majority’s analysis, including how it would impact government regulations allowing access to property, noting he “suspect[s] that the majority has substituted a new, complex legal scheme for a comparatively simpler one.”

However, whether significant litigation will result from this decision remains to be seen and the fact that the majority included the information about government inspections and searches ultimately helps lessen the impact of the decision for local governments.  To read the full opinion, click here.