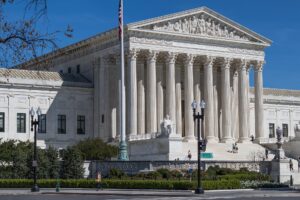 Today in a unanimous, but narrow opinion, the Supreme Court struck down the First Circuit’s expansion of the exception to the warrant requirement known as the “community care-taking doctrine” from automobiles to the home.  The Court left open the possibility that exigent circumstances might justify a search without a warrant under these circumstances, but that issue was not before the Court in this case.

In this case, Kim Caniglia and her husband got in a fight during which he went and got a gun, threw it on their dining room table and said: “shoot me now and get it over with.” She left the home and stayed at a hotel.  The next morning, when she could not reach her husband on the phone, she called the non-emergency line and asked the police to accompany her to her home, recounting the fight from the evening before and her concern about “what she would find” when she got home.

The police accompanied her and spoke to her husband, Edward Caniglia, on the porch of their home.  The ranking officer determined Edward was “imminently dangerous to himself and other” and convinced him to go to the hospital for a psychiatric evaluation. Edward claims he only agreed to go because the officers told him his firearms would not be confiscated if he went. After Edward went to the hospital, police seized his firearms.

Edward sued, claiming that he and his guns were unconstitutionally seized without a warrant in violation of the Fourth Amendment.  The First Circuit found no Fourth Amendment violation in this case relying on the community care exception from Cady v. Dombrowski, 413, U.S. 433 (1973).  In Cady, the Supreme Court upheld a warrantless search of an automobile that the police believed contained a firearm because the search was divorced from their criminal investigatory activities and was based solely on the police officers’ community caretaking functions in preventing vandals from accessing the car and obtaining the gun.

The Supreme Court had never extended the community caretaking function to justify warrantless searches and seizures in the home and today in a unanimous opinion authored by Justice Thomas, the Court closed that door, concluding the exception does not extend into the home.  The Court explains that there is an important constitutional difference between searching a vehicle (Cady) and searching a home and “[w]hat is reasonable for vehicles is different from what is reasonable for homes.”

In an attempt perhaps to limit the reach of its decision, the Court noted that its previous decisions have allowed for intrusions into the home when police have a warrant, when consent is provided, or when exigent circumstances exist, “including the need to render emergency assistance to an injured occupant or to protect an occupant from imminent injury.” (internal quotations omitted).  The Court noted that the respondent in this case had not argued that exigent circumstances justified the warrantless intrusion.

Three separate concurrences authored by Justices Roberts, Alito, and Kavanaugh underscored the important function officers engage in when they seek to render emergency assistance.  Two of those concurrences noted the frequency with which the elderly fall in their homes and the need for police to be able to respond to calls related to these types of exigencies that fall outside the criminal context, including both falls and also suicide.  Justice Alito highlighted a scenario that came up at oral argument where hypothetical neighbors call the police because their elderly neighbor did not come to dinner and she is never late.  The question posed at oral argument was whether it would violate the Fourth Amendment to enter the home to check on her without a warrant; and the petitioner in this case indicated it would.  To that, Justice Alito quipped that “[t]his imaginary woman may have regarded her house as her castle, but it is doubtful that she would have wanted it to be the place where she died alone and in agony.”  In making this observation, Justice Alito noted the Court’s current precedents do not address this situation and suggested that States could seek to institute procedures for warrants in these non-criminal cases.

Justice Kavanaugh called the issue and decision in this case “more labeling than substance,” indicating he believed there should not be a community care-taking exception to the warrant requirement, but that he also believed the Court’s current exigent circumstances doctrine would “of course” allow police to enter the home of the elderly person who falls and needs assistance but does not answer the door or the suicidal individual who is in his or her home and similarly does not let the officers inside voluntarily.

IMLA joined a brief filed by the SLLC highlighting the importance of avoiding an absolutist rule which would bar police and other first responders from performing non-criminal, emergency duties, like wellness checks, helping to prevent suicide, and assisting the elderly and mentally ill.  In our brief, we highlighted that wellness checks and preventing suicide do not involve criminal investigations and thus warrants are often not available in these situations.  While the case is not a direct “win”, given the narrow scope of the majority decision and the concurrences that all highlight their belief that police would be able to enter homes in these scenarios, perhaps Justice Kavanaugh is right that the issue is one of labeling rather than substance.  However, as Justice Alito notes, there are still many open questions in this area that lower courts will need to grapple with under the Fourth Amendment until the issue of exigent circumstances in these scenarios is properly before the Court.