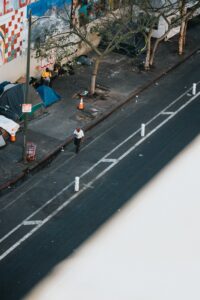 On Tuesday, April 20, 2021, federal Judge David Carter of the Central District of California ordered that the City and County of Los Angeles provide housing and related assistance for all homeless persons in the area known as “Skid Row” by October 18.  According to the Los Angeles Homeless Services Authority, that number now exceeds 4,600 people: 4700 – 2020 Greater Los Angeles Homeless Count—Skid Row (lahsa.org)

Judge Carter’s decision in LA Alliance for Human Rights v. City of Los Angeles, cv. 20-02291 (C.D. Cal. Apr. 20, 2021) consumes 110 pages, beginning and ending with allusions to Lincoln and the Gettysburg address.  It identifies Los Angeles’s homeless problem as disproportionately affecting people of color, reflecting decades of discriminatory employment and housing policies and repeated instances of underperformance by authorities despite the continued influx of billions of dollars:

Today, people of color, and Black people in particular, are vastly overrepresented in Los Angeles’s homeless population. While Black people comprise only eight percent of Los Angeles’s population, they make up 42% of its homeless population. As of January 2020, the Los Angeles Homeless Services Authority reported that 21,509 Black people were without permanent housing in Los Angeles (LAHSA).  The current inaction on the part of the City and County of Los Angeles has allowed the harms of their racist legacy to continue unabated, leaving Black people—and especially Black women—effectively abandoned on the streets. Such governmental inertia has affected not only Black Angelenos, not only homeless Angelenos, but all Angelenos—of every race, gender identity, and social class. Virtually every citizen of Los Angeles has borne the impacts of the City and County’s continued failure to meaningfully confront the crisis of homelessness. The time has come to redress these wrongs and finish another measure of our nation’s unfinished work.

The decision finds a broad spectrum of actionable wrongs ranging from denial of Due Process and Fifth Amendment associational rights, state-created danger and deliberate indifference, as well as ADA violations:

This practice of disrupting unhoused Black families’ constitutional right to family integrity by compounding structural racism in present day policies is sufficient to find Plaintiffs have a likelihood of success on their due process claim. A practice of this sort implemented in this manner is likely to be “so egregious, so outrageous, that it may fairly be said to shock the contemporary conscience,” County of Sacramento v. Lewis, 523 U.S. 833 at 847 n.8, interferes with rights “‘implicit in the concept of ordered liberty[,]’” Rochin v. Cal., 342 U.S. 165, 169 (1952) (quoting Palko v. State of Conn., 302 U.S. 319, 325 (1937)), and is so “‘brutal’ and ‘offensive’ that it [does] not comport with traditional ideas of fair play and decency.” Breithaupt v. Abram, 352 U.S. 432, 435 (1957.

Because of the City and County’s persistent inaction and inertia in creating shelter for the homeless, thousands of homeless individuals have erected tents that obstruct city sidewalks. To satisfy the ADA, public sidewalks must have at least 36 inches of passable sidewalk, and the City and County are responsible for ensuring that this requirement is met. 36 C.F.R. § 1191, app. D. § 403.5.1 (2014); Willits v. City of Los Angeles, 925 F. Supp. 2d 1089, 1093 (C.D. Cal. 2013). Hundreds of city sidewalks, not only in Skid Row but across the City and County of Los Angeles, fail to meet the minimum requirements of the ADA due to the creation of homeless encampments. Again, it must be emphasized that these encampments— and the resulting ADA violations—are the outcome of decades of active policy choices and deliberate indifference on the part of the City and County. The Court thus finds that Plaintiffs are likely to succeed on an ADA claim under this theory.

The decision also finds joint responsibility by the City and County under California law:

Simply put, under the aegis of local, state, and federal initiatives, the City and County together have become jointly responsible for fulfilling the mandate of § 17000, at least as it pertains to confronting the crisis of homelessness. Therefore, the Court finds that the most reasonable interpretation of § 17000—the interpretation most in step with modern partnerships and funding arrangements between the City and County—is that it applies not only to counties alone, but to cities and counties when they undertake a joint venture directed to the goals of § 17000, such as a coordinated effort to alleviate homelessness in their jurisdictions. Thus, the Court finds that Plaintiffs are likely to succeed on the merits of a claim under Cal. Welf. & Inst. Code § 17000 both against the City and the County.

Judge Carter imposed on the City and County a rigorous schedule of deliverables, including the following:

He also requires an immediate and comprehensive search for acceptable housing sites throughout Los Angeles and a cessation of sales or transfers of City- and County-owned properties:

The order did not define with particularity the specifics of acceptable shelter or housing.

Appeal: On April 21, 2021, Los Angeles County filed its notice of interlocutory appeal to the Ninth Circuit.

The Court provides the following two clarifications regarding the Preliminary Injunction issued on April 20, 2021. First, the directives under Accountability and City- and County-Wide Actions pertain to all districts in the City and County and are not limited in any way to Skid Row. Second, the provision regarding the cessation of sales and transfers by lease or covenant under Section 2(a)(ii) does not apply to projects in progress as of the date of the order, April 20, 2021. (kd) (Entered: 04/22/2021)