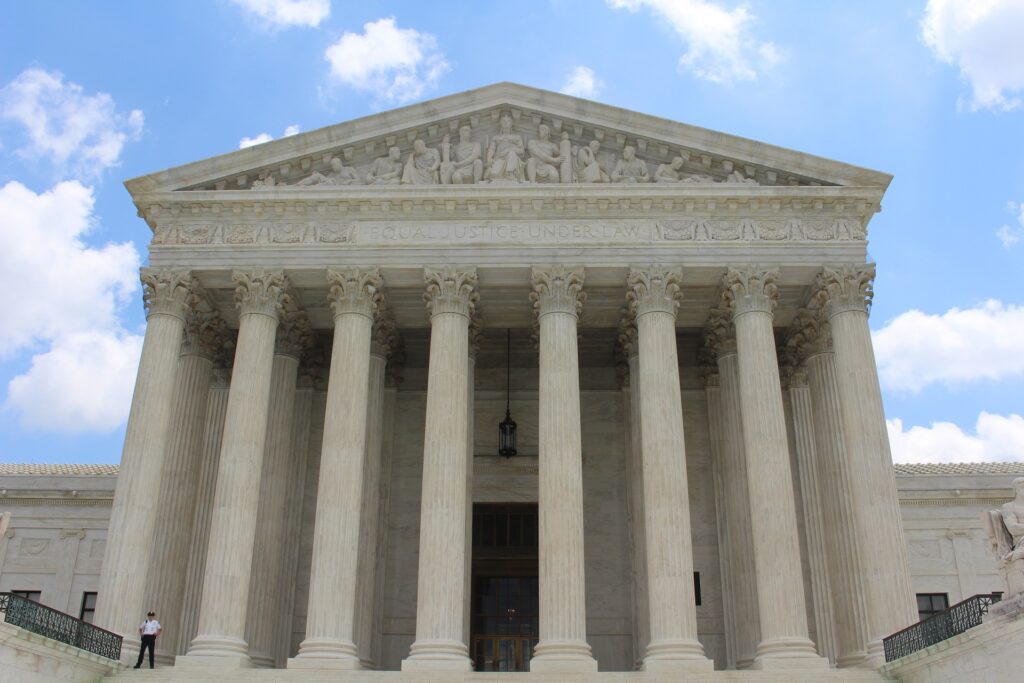 Today, in Torres v. Madrid, the Supreme Court provided a new rule for determining if a seizure occurs under the Fourth Amendment where force is used, but a suspect gets away.  In a 5-3 ruling (Justice Barrett did not take part in the decision), the Court concluded that “[t]he application of physical force to the body of a person with intent to restrain is a seizure, even if the force does not succeed in subduing the person.”

In this case, two police officers sought to arrest a woman at her apartment. They noticed two women standing in front of the apartment next to a Toyota Cruiser and decided to talk to them. The officers were wearing tactical vests with police markings. Torres was in the car and experiencing methamphetamine withdrawal (or according to the dissent “‘tripping out bad’ on methamphetamine”). One of the officers told Torres several times to show her hands.

Torres claims she did not realize the individuals outside her car were police officers and instead, when she heard the flicker of the car door, she thought she was being carjacked.  The facts are in dispute, but Torres drove away.  She claims neither officer was in her path as she started driving, but the officers claim she drove at one of them.  What is not in dispute is that the officers fired at her 13 times and two of the bullets struck her.  (Whether she was driving at the officers will ultimately be resolved below and will go toward the reasonableness of the seizure).  Despite being shot, Torres, drove away, stole a car, drove that car 75 miles and checked herself into a hospital. She was airlifted back to Albuquerque to another hospital for treatment and the officers arrested her the next day.

She sued, claiming the officers used excessive force.  The Tenth Circuit rejected her claim, holding that no seizure occurred because the use of force applied “must terminate the suspect’s movement” or result in physical control of the suspect.

In an opinion authored by Chief Justice Roberts, the Supreme Court reversed.  Relying on common law at the time of the Fourth Amendment’s adoption and before, as well as the Court’s precedent, the Court held that “the officers’ shooting constituted physical force to her body and objectively manifested an intent to restrain her from driving away” and therefore concluded she was seized “the instant that the bullets struck her.”

The Court came to its conclusion relying, in part, on Hodari D. for the proposition that “the application of force gives rise to an arrest, even if the officer does not secure control over the arrestee.”  The Court explained that this common law rule, which Hodari D. relied on, “achieved recognition to such an extent that English lawyers could confidently (and accurately) proclaim that ‘[a]ll the authorities, from the earliest time to the present, establish that a corporal touch is sufficient to constitute an arrest, even though the defendant do not submit.’”  Even though the common law did not deal with weapons, the Court extrapolated the rule regarding arrests to all seizures including the application of force and saw no reason to draw “artificial line[s] between grasping with a hand and other means of applying physical force to effect arrest.”

While this case is a disappointing loss for local governments, the State and Local Legal Center / IMLA’s amicus brief was persuasive enough that the majority felt the need to quote our brief and reject our arguments, and the dissent made many of the same arguments that we did (though did not quote/cite our brief).

Finally, as alluded to above, the majority remanded the case to determine if the seizure in this case was reasonable and/or if the officers were entitled to qualified immunity.

The dissent, authored by Justice Gorsuch and joined by Justices Thomas and Alito, complains:

The majority holds that a criminal suspect can be simultaneously seized and roaming at large. On the majority’s account, a Fourth Amendment “seizure” takes place whenever an officer “merely touches” a suspect. It’s a seizure even if the suspect refuses to stop, evades capture, and rides off into the sunset never to be seen again. That view is as mistaken as it is novel.