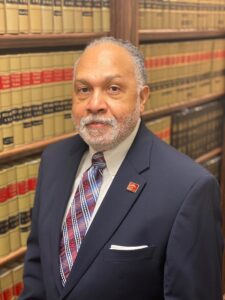 In a business meeting held on October 3, 2020, virtually, IMLA confirmed the nomination of Tyrone Cooper of Beaumont, Texas to be President of IMLA. Mr. Cooper is currently the City Attorney of Beaumont, Texas. He has served in that capacity since being appointed in November of 2004. State and locally, he is a past President of the Texas City Attorneys Association (TCAA) where he served on the Board of Directors from 2003-2010 and returned to the board for a two (2) year term in 2013 as the TCAA representative to the Board of Directors for the Texas Municipal League (TML). Tyrone is a two-time graduate of the University of Houston, with a Bachelor of Science in 1976 and a Doctor of Jurisprudence in 1979. As a graduate of the University of Houston and the University of Houston Law Center, Tyrone began his legal career as an Assistant with the City of Beaumont City Attorney’s Office in 1979. Tyrone was recognized in 2019 by the University of Houston Black Alumni Association as a heritage honoree, Celebrating a History of Legacy and Leadership.  He has been involved with IMLA since the 1980s. and has served on the Board of Directors since 2013 and chaired several committees. Tyrone was honored with the IMLA James H. Epps Award in 2015 for longevity of municipal service to the same community. Tyrone is licensed to practice in the Texas state courts, the United States District Courts for the Eastern District of Texas, the United States Fifth Circuit Court of Appeals, and the United States Supreme Court.

In response to Mr. Cooper’s new position, his Texan colleagues had many well wishes and congratulatory thoughts:

Scott Houston, General Counsel at the Texas Municipal League, said, “Tyrone has been a friend and mentor to me for over two decades.  His steadfast service to the City of Beaumont and to all Texas municipal attorneys through his service on the board of the Texas City Attorneys Association have meant so much to all of us in the Texas legal community”

Alan Bojorquez of Bojorquez Law Firm, PC, noted, “Through is words, deeds, and the example he has set, Tyrone has consistently inspired professionalism and dedication among municipal attorneys in Texas, in the US, and internationally.”

Art Pertile, of Olson & Olson LLP and Past IMLA President, said, “Congratulations Tyrone! You have been a wonderful leader in the Beaumont community, City of Beaumont and the Texas City Attorney Association. I know you will be a great leader for IMLA.”

Sylvia B. Firth, President-Elect of the State Bar of Texas, added, “Tyrone Cooper’s dedication to the practice of municipal law is exemplary. His professionalism and level of expertise has been an inspiration to many.  It is more than fitting that he should be the next IMLA President.”

Lastly, Paige Mims, City Attorney of Plano, Texas, added, “Tyrone Cooper exemplifies servant leadership and he continually gives his time and talent to the development, advocacy, and support of municipal attorneys and our profession. Tyrone is not only an excellent lawyer, but he is a quality person. He really cares about and invests in people. We have been blessed by his contributions in leadership roles in Texas and I look forward to the positive impact he will make as IMLA President.”

Chuck Thompson, IMLA’s Executive Director and General Counsel had similar high praise regarding Mr. Cooper’s appointment: “Tyrone has served IMLA in leadership capacities over his term on our board and enjoys the respect of all who have worked with him.  We at IMLA are looking forward to the coming year under his leadership as we strive to achieve his goals as President.”