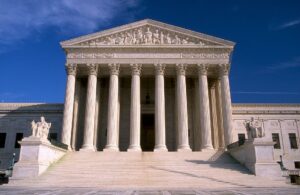 ast week, in a 7-2 decision in Minnesota Voters Alliance v. Mansky, the Supreme Court struck down Minnesota’s law barring “political apparel” from a polling place on Election Day because even in a nonpublic forum, “the State must be able to articulate some sensible basis for distinguishing what may come in from what must stay out.” Although Minnesota lost the case, the Court affirmed that States (and local governments) may validly exclude certain forms of advocacy, including passive advocacy like wearing apparel, from a polling places so as to provide an “island of calm in which voters can peacefully contemplate their choices.” They just have to be reasonable about their restrictions.

Minnesota, like every other State, has laws that restrict speech in its polling places on Election Day. Under Minnesota law, voters are prohibited from wearing a political badge, political button, or anything bearing a political insignia inside polling place on Election Day. Minnesota election judges have the authority to determine whether a specific item falls under the ban. If they determine that it does, the election judge asks the person to remove the item or cover it up though the person is still allowed to vote even if they refuse. (Instead, if they refuse, they are supposed to receive a citation that could impose a fine).

Minnesota had provided guidance on the political apparel ban to its election judges including that political apparel meant not only any item with a political party or candidate on it, but also any item that supports or opposes a ballot question or an issue on which a candidate has taken a position, or finally, material promoting a group with a recognizable political view (such as the Tea Party or MoveOn).

The Petitioners filed a lawsuit claiming the statute violated the First Amendment on its face and also as applied to them. A number of them wore “Please I.D. Me” buttons and another petitioner wore a Tea Party shirt and they were asked to remove the items on Election Day.

The Eighth Circuit upheld the law both on its face and as applied to the Petitioners.

Chief Justice Roberts, writing for the majority, reversed. The Court began its analysis by recounting the history of contentious and disruptive voting at polling places in America and noting that all 50 states and the District of Columbia have laws curbing various forms of speech in and around polling places on Election Day as a result of some of those early Election Day follies.

In turning to Minnesota’s law, the Court noted that the speech restriction only applied to a government property, thus the Court applied its nonpublic forum analysis to the law, meaning that “the government may impose some content based restrictions on speech in nonpublic forums, including restrictions that exclude political advocates and forms of political advocacy.” The question therefore, according to the Court was “whether Minnesota’s ban on political apparel is reasonable in light of the purpose served by the forum: voting.” (internal quotations omitted).

The Court agreed with Minnesota’s decision that certain “forms of advocacy should be excluded from the polling place, to set it aside as an island of calm in which voters can peacefully contemplate their choices” and further that the Court’s prior decisions about the “nondisruptive” nature of expressive apparel were not applicable to the “unique context of a polling place on Election Day.” In other words, “States may reasonably take steps to ensure that partisan discord not follow the voter up to the voting booth, and distract from a sense of shared civic obligation at the moment it counts the most.”

However, to restrict speech in a nonpublic forum, a State must still “draw a reasonable line.” The fact that the term “political” was undefined in Minnesota’s law, coupled with the guidance provided to election judges, which as evidenced by the exchanges at oral argument would result in “haphazard interpretations,” the State failed even this “forgiving test.” The following positions taken by Minnesota during oral argument underscored the Court’s reasoning that Minnesota’s law is too subjective and would likely result in impossible tasks for election judges.

The Court explained that while “perfect clarity and precise guidance have never been required of regulations that restrict expressive activity, the Minnesota law “poses riddles that even the State’s top lawyers struggle to solve” and was therefore unconstitutional under the First Amendment.

Justice Sotomayor, joined by Justice Breyer, dissented. The dissent would have certified the question of the proper interpretation of the state law to Minnesota’s Supreme Court.

IMLA joined an amicus brief filed by the SLLC and authored by Charles Rothfeld. In our brief, we outlined some of the historical and present-day disruptions in polling places and one of the examples we provided was cited by the dissent. Although this case was not technically a win, much of the decision’s language is favorable to state and local governments in terms of expressing support for restrictions of speech in nonpublic forums on Election Day.